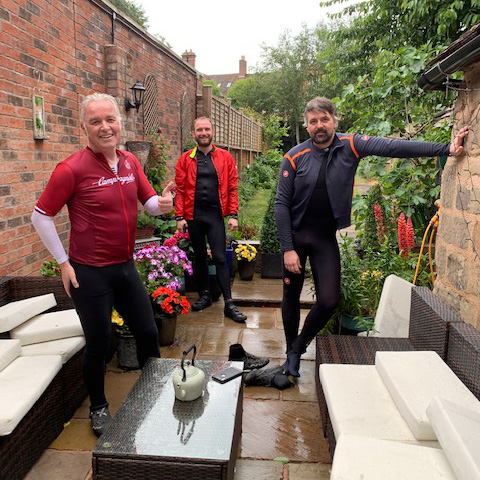 VFE is raising money for two very personal charities by taking on the Coastline Challenge in 2021 in support of Stand Against Motor Neurone Disease and Mind. To donate, use this link

For Sam Perkins, it began in the smallest of ways. Slight tremors in his arms and legs and occasional shortness of breath. Sam, then 37, thought nothing of it. His main hobby was triathlons, and he’d competed in almost 40 races, including the Robin Hood Marathon and two Ironman races. Yet within 18 months, this fit, healthy man was struggling to walk.

His condition worsened, and on 6th March 2019, Sam was diagnosed with motor neurone disease (MND).

“Being diagnosed with a serious illness wasn’t something I’d given a lot of thought to before”, Sam reveals on his Just Giving page. “When it happened, my instinct was to ask: ‘so what do we do now?’ I expected the conversation that followed to focus on treatment options, the likelihood of success, and how difficult the path ahead may be for me and my family. But with MND that just doesn’t happen.”

MND is a rare condition that progressively damages parts of the nervous system. Also known as amyotrophic lateral sclerosis (ALS), it occurs when specialist nerve cells in the brain and spinal cord called motor neurones stop working properly. It can happen to anyone. The rate of decline Sam would experience was unknown. There is currently no known cure.

Since then, Sam, with the support of his family, has launched the Stand Against Motor Neurone Disease charity to raise funds that will go towards researching a cure and helping to fund hospice care for those affected by MND.

“We want to continue to raise awareness of this disease and its effects to make finding a cure a priority”, Sam explains. “Maybe this won’t come in time for me, but if it makes even the smallest difference to other sufferers then it was worth doing.”

Stand Against Motor Neurone Disease is very personal to VFE Senior Technical Manager Phil Neath and his family. Sam is Phil’s nephew, so when we heard Sam’s story last year, we wanted to show our support.

In aid of Sam’s charity, last year a team of VFE cyclists got on their bikes and rode the equivalent distance of Lands’ End to John o’ Groats back (a total of 1,748 miles) on roads around their local area. Our target was £5,244, which was £3 for every mile cycled. The challenge lasted nine days and thanks to the team’s hard work and commitment, we raised a total of £5608.

Following the success of the cycling challenge last year and the phenomenal amount raised for Stand Against Motor Neurone Disease, we are launching another charity challenge in 2021.

Read the full article to catch a glimpse of some of the team looking svelte in lycra.

The team are aiming to complete a total of 7,700 combined miles starting 1st June to 31st July.  This is a family and friends’ event that everyone can join in by walking, jogging, running, rowing or cycling as many miles as possible during the period.

The challenge will also include the combine miles cycled for the Tour De France which will be completed on the actual date (or nearest convenient date) of the specific stage that runs from 26th June to 18th July.

A person or a small group will pick the Tour De France stage and ride the equivalent distance of that stage on the day of said stage being ridden by the professionals in France.

After a year of national lockdowns, you might not catch us in the same lycra get-up we sported last year, but together, we will complete the full distance of 3,383 km / 2,102 miles.

We are proudly supporting the charities Mind, which considering the challenges of the last 12 months, we thought would be a fantastic cause and Stand Against Motor Neurone Disease.

The total donations raised will be split equally between both charities.

“2020 has been tough on all of us”, David explains. “We hope this event will help motivate people to get outside and exercise, which is as important for an individual’s mental health as it is for their physical wellbeing. We could all use some of that right now.”

We have challenged our colleagues, business partners, family and friends to walk, jog, run, row or cycle the equivalent distance of the coastline of England, Scotland and Wales over eight weeks. The mapping authority for the UK, the Ordnance Survey, records the coastline of the main island, Great Britain, as 11,022.76 miles, rounding to 11,023 miles/17,820 km.

If you or someone you know are struggling with your mental health, you can get help now using Mind’s emergency advice and crisis helping tools. Click here for more information.

A fund-raising page has been set up, and we kindly ask that you share this link with your friends, family and networks; https://uk.virginmoneygiving.com/VFELtd

We would like to raise as much money as we can in support of the two charities and the fantastic work they are doing, and we thank you all in advance for your support.